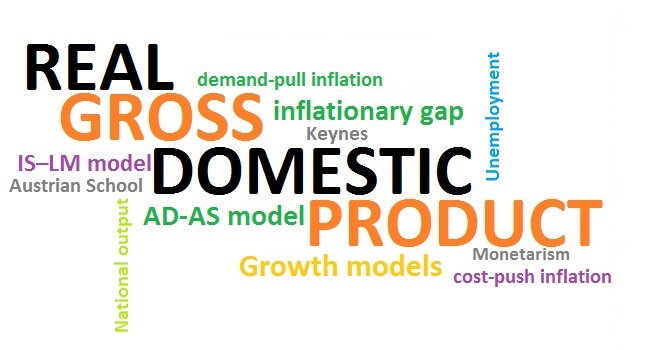 Real gross domestic product (Real GDP) is an inflation-adjusted measure that reflects the value of all goods and services produced by an economy in a given year, expressed in base-year prices, and is often referred to as “constant-price,” “inflation-corrected” GDP or “constant dollar GDP.” Unlike nominal GDP, real GDP can account for changes in price level and provide a more accurate figure of economic growth.

Real gross domestic product is a macroeconomic assessment that measures the value of the goods and services produced by an economic entity in a specific period, adjusted for inflation. GDP is derived by valuing all production by an economy using a specific year’s average prices. Governments use GDP as a comparison tool to analyse an economy’s purchasing power and growth over time. This is done by looking at the economic output of two periods and valuing each period with the same average prices and comparing the two together.

Nominal GDP is a macroeconomic assessment that includes current prices in its measure. The main differentiating factor between nominal GDP and GDP is nominal GDP includes inflation and is therefore normally higher than GDP. Since GDP is calculated using a base year and does not include inflation, it represents an economy’s nominal GDP if that economy did not realize any price changes when compared to the base year.

For example, say that in 2004, nominal GDP was $200 billion. However, due to an increase in the level of prices from the base year 2000 to 2004, GDP is $170 billion. The lower real GDP reflects the price changes while nominal GDP does not.

GDP deflator is simply any figure produced based on inflation rate. For instance, lets assume there was inflation of 4% in an economy in a given year. Here the deflator will be equal to 1.04.

For Example, lets say total value of all the goods and services produced by an economy in a year is $1,000 billion. Lets also assume that this economy has experienced 4% inflation over the course of the year. Real GDP would be calculated as:

After inflation adjustment, that economy actually produced $961 billion worth of goods and services.

Is a High GDP Good?

Any ordinary person will perceive a higher GDP to be a good thing but he may be wrong. That person will associate this higher GDP with greater economic opportunities and an improved standard of living. There are other measures of economic development which must be considered alongside GDP. One of these measures include Human Development Index (HDI). Therefore, it is possible for a country to have a high GDP and still be an unattractive place to live. For instance, a country may have a low per-capital GDP but it has a very high GDP. This means that abundant wealth exists but is concentrated in the hands of very few people.

10 largest countries by GDP according to the UNCTAD at 2005 constant prices and exchange rates, 2015