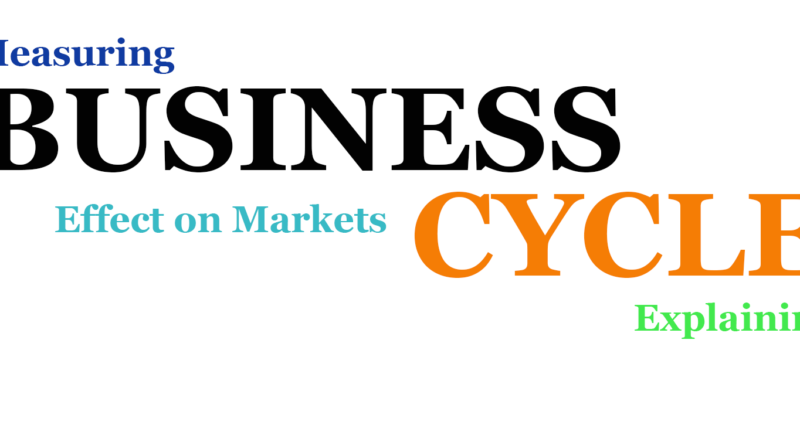 What is the Business Cycle

The business cycle describes the rise and fall in the production output of goods and services in an economy. Business cycles are generally measured using rise and fall in the real – inflation-adjusted – gross domestic product (GDP), which includes output from the household and nonprofit sector and the government sector, as well as business output. “Output cycle” is, therefore, a better description of what is measured. The business or output cycle should not be confused with market cycles, measured using broad stock market indices; or the debt cycle, referring to the rise and fall in household and government debt.

The business cycle or output cycle is often visualized in terms of consistent expansions and contraction, almost like a sine wave. Actual fluctuations in real GDP, however, are far from consistent.

Expansion is measured from the trough (or bottom) of the previous business cycle to the peak of the current cycle, while the recession is measured from the peak to the trough. In the United States, the Business Cycle Dating Committee of the National Bureau of Economic Research (NBER) determines the dates for business cycles. Committee members do this by looking at real GDP and other indicators including real income, employment, industrial production, and wholesale retail sales. Combining these measures with debt and market measures helps understand the causes of expansions.

Choosing June 2009 as the trough for the most recent recession was difficult for NBER committee members. When they looked at the data, 10 measures hit lows in the period from June to December 2009. The recession began in December 2007 and lasted 18 months, making it the longest downturn recession since World War II. Previously the longest postwar recessions were those of 1973-75 and 1981-82, both of which lasted 16 months.

The Business Cycle’s Effect on Markets

Recessions can extract a tremendous toll on stock markets. Most major equity indexes around the world endured declines of over 50% in the 18-month period of the Great Recession, which was the worst global contraction since the 1930s Depression. Global equities also underwent a significant correction in the 2001 recession, with the Nasdaq Composite among the worst-hit: the index plunged by almost 80% from its 2001 peak to its 2002 low. Importantly, recessions due to credit bubbles bursting are far worse on income and consumption than from stock market speculative bubbles bursting.